EXECUTIVE SUMMARY
Large swathes of the northern Syrian governorate of Deir-ez-Zor have been under the control of the Islamic State of Iraq and the Levant (ISIL) since mid-2014. On 5 September 2017, the Government of Syria (GoS) and allied forces broke ISIL’s three-year siege on the government-held parts of the governorate’s capital city, also called Deir-ez-Zor. ISIL is becoming increasingly isolated as the GoS and allied forces advance on several fronts towards ISIL-held territory in the governorate, and the Syrian Democratic Forces (SDF), backed by the US-led coalition, advance from the north. The intensity of clashes and airstrikes continues to result in civilian casualties, large numbers of internally displaced people (IDPs), and damaged or destroyed infrastructures including health care facilities. 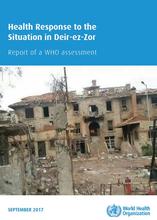 In light of the increasing conflict and the rising health needs in the governorate, a WHO team comprising an external trauma care specialist, a WCO trauma specialist and other staff met with UN partners, nongovernmental organizations (NGOs), the Ministry of Health (MoH), the Syrian Arab Red Crescent (SARC) and the International Committee of the Red Cross (ICRC) in Damascus in early September 2017. The purpose of the meeting was to assess the availability and accessibility of trauma and specialized care for wounded and critically ill patients in Deir-ez-Zor governorate. (Security constraints meant the team was not able to visit the governorate to assess the situation at first hand.)

The present report, based on information gathered during the meeting, describes:

The main findings and recommendations from the Damascus meeting are summarized below:

(more in the PDF)