On 4 August 2021, under the leadership of the Humanitarian Coordinator, the Humanitarian Country Team (HCT) launched the Emergency Response Plan (ERP) for Lebanon. Strictly humanitarian in nature, the 12-month multi-sector emergency response plan aimed to address the needs of the most vulnerable among the Lebanese, migrants, and Palestine refugees in Lebanon (PRL) affected by the multiple crisis, and to complement the Lebanon Crisis Response Plan (LCRP) – the framework to address the impact of the Syria crisis in Lebanon which mainly targets Syrian Refugees and host communities. The ERP sought to provide exceptional time-bound assistance to protect and save lives and alleviate suffering of the target population, while scaling up urgent aid for the most vulnerable.

Eight months after the launch of the ERP, the financial and socio-economic crisis, compounded by the lack of reforms, the political impasse, the COVID-19 pandemic and the impact of the Ukrainian crisis, has further deteriorated leading to a sharp increase in humanitarian needs. Primary and secondary data collection and joint analysis undertaken at sectoral and multi-sectoral levels by the Emergency Operations Cell (EOC) and the HCT released in April clearly shows a further decline in living conditions with many more unable to access basic services.

As of end of April 2022, thanks to the donors’ generosity, humanitarian actors managed to reach 600,000 people (Lebanese, migrants and PRL) with multisectoral assistance under the ERP. However, sectoral assessments and the multisectoral needs assessment (MSNA) conducted in late 2021 found that humanitarian assistance was necessary for many of the most vulnerable families, but it remained largely insufficient. Around 85 per cent of Lebanese households, 66 per cent of PRL households and 95 per cent of migrant households reported that they did not receive any assistance during the three months preceding the assessment. Additionally, vulnerable groups cited information about humanitarian assistance, health care and livelihoods as their top priority information needs.

Informed by the latest evidence, the HCT has requested a revision and extension of the ERP until December 2022 to continue adjusting and scaling up urgent and much-needed lifesaving response in areas under severity 3, 4 and 5. To do so, the humanitarian community is requesting an additional US$ 163 million until the end of December 2022.

This ERP revision outlines, on one hand, the progress made to date against activities from the ERP as reported by humanitarian partners; and on the other hand, the change in humanitarian needs and targets, together with the revised sectoral response plans and corresponding financial requirements estimated by sectors.

Under the leadership of the Humanitarian Coordinator, the Humanitarian Country team, supported by the Emergency Operation Cell and humanitarian sectors, will reinforce its commitment towards nine priorities, building upon the important progress made thus far, existing gaps and needs identified in line with global guidance and standards.

Lebanon is experiencing a multi-layered crisis with acute and increasingly visible humanitarian consequences. Since 2019, the country has been going through a complex economic and financial crisis – deepened by a political deadlock – which has offset some of the development gains of the past years and generated humanitarian needs for the most vulnerable populations in severely deprived areas in the country.

The COVID-19 pandemic and the disastrous impact of the Beirut Port explosions in August 2020 further exacerbated long-term structural vulnerabilities, worsened protection risks – including violence against women and girls - and contributed to soaring humanitarian needs.

Meanwhile, Lebanon continued to manage the spill-over of the Syrian crisis since 2011 and while refugee communities are generally welcomed, antagonistic sentiments and statements regarding refugees have been increasing1 – a warning sign of a society struggling with the rapidly evolving context that has seen new humanitarian needs surface among its residents. The capacity of the country to cope with all these overlapping shocks was nearly exhausted in 2021 and is likely to further decrease in 2022 in the absence of comprehensive long-term development plans and structural reforms.

The Humanitarian Country Team (HCT) tasked the Emergency Operations Cell (EOC) in 2021 to undertake a joint analysis of needs to understand the scope and scale of humanitarian needs in Lebanon and provide a comprehensive evidence-base to inform decision-making related to potential response options.

The analysis in the “Increasing Humanitarian Needs in Lebanon” document focuses on the humanitarian needs of the Lebanese, migrants and Palestine refugees in Lebanon (PRL). It is elaborated by sectors and the Emergency Operations Cell (EOC). It remains complementary to the analysis of the impact of the Syria crisis and needs of affected populations conducted in 2021, which informed the Lebanon Crisis Response Plan (LCRP) for 2022-2023. An annex summarizing needs analysis on refugees from Syria has been included at the end of this document.

Attached to the document; a summarized At Glance available in English and Arabic.

This document is consolidated by OCHA on behalf of the Humanitarian Country Team and partners.

Overview of the Emergency Response Plan for Lebanon (EN/AR) 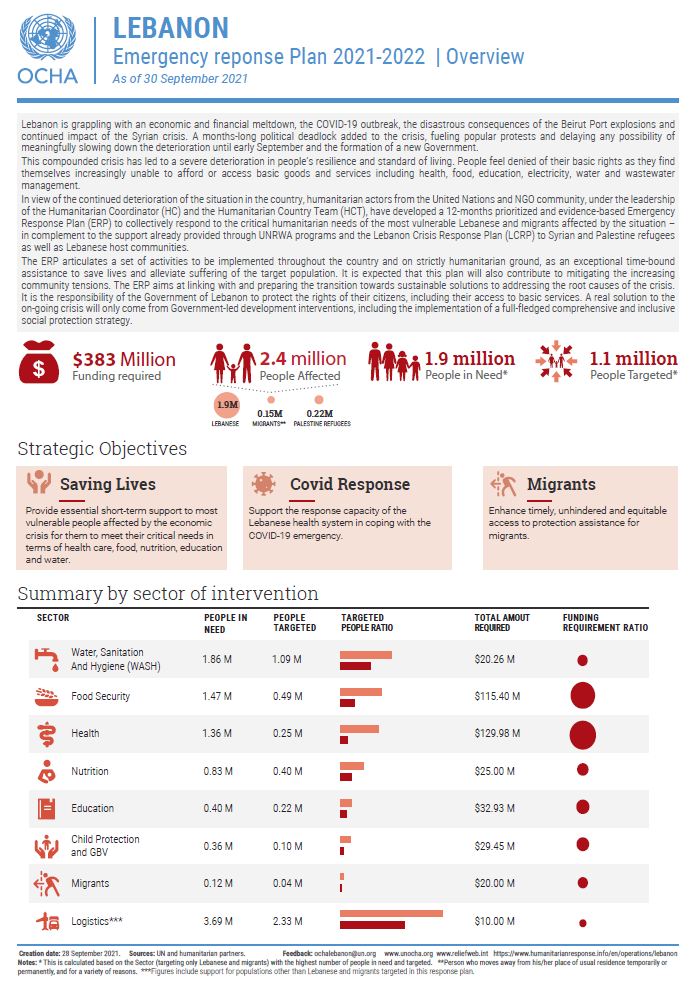 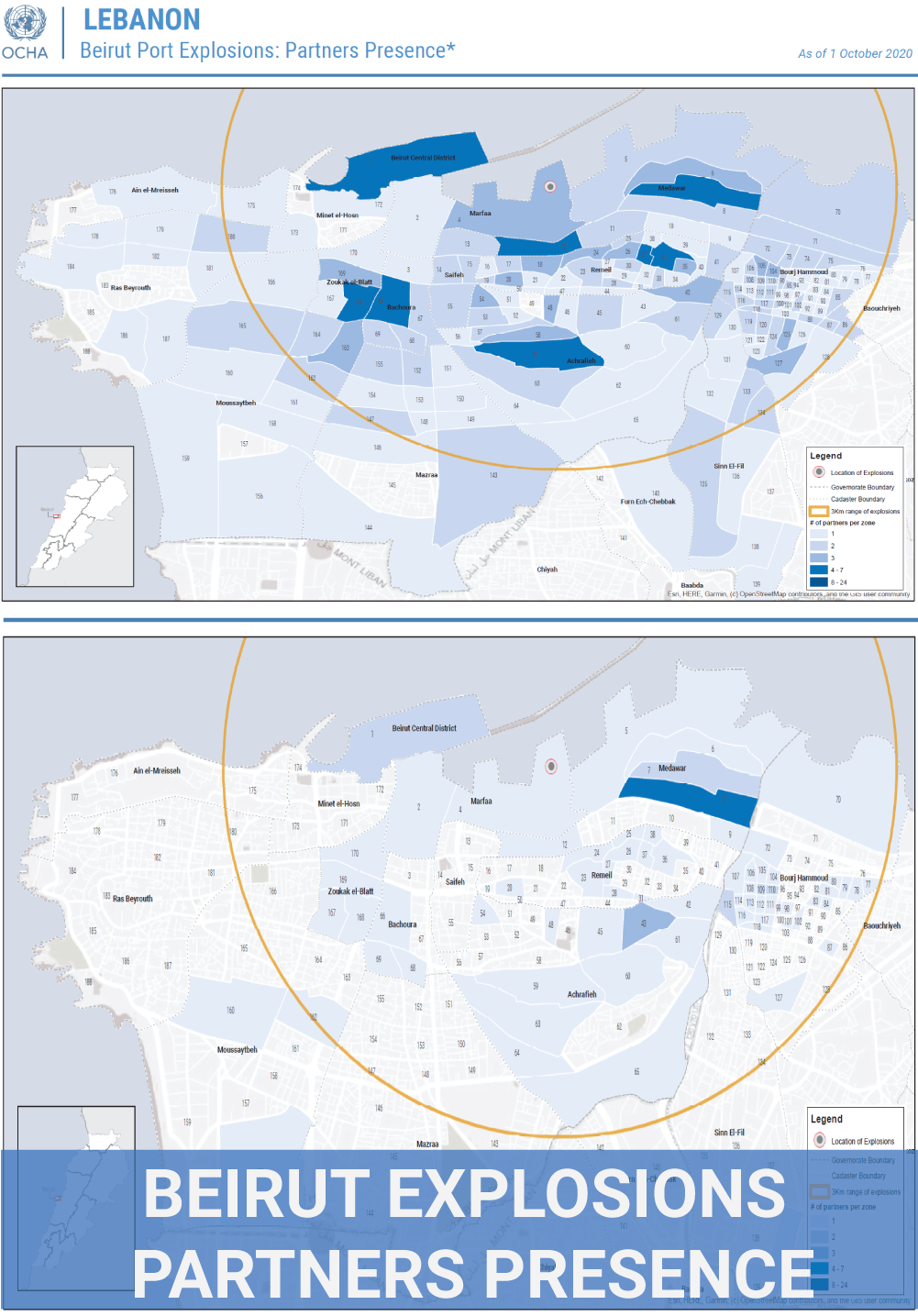 Latest Maps and Infographics from ReliefWeb