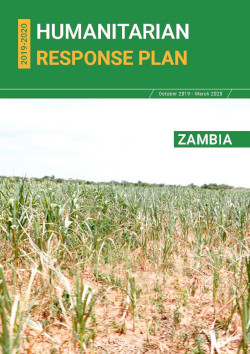 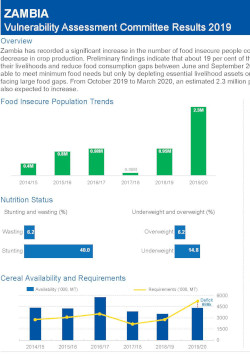 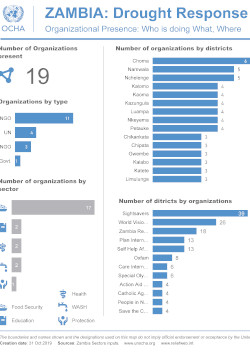 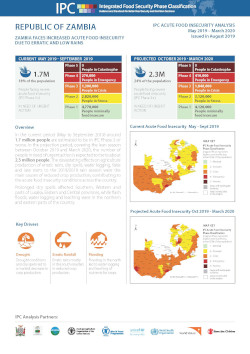 More than 2.3 million people are expected to be severely food insecure during the lean season (October - March), with at least 430,000 of them in Emergency levels (IPC 4), according to the last Zambia Vulnerability Assessment Committee (ZVAC) / IPC report. The devastating combination of prolonged and severe drought in the southern part of the country over the last two rainy seasons and floods in the north has driven increasing hunger. According to the Zambia Meteorological Department (ZMD), 2018-2019 rainfall season was one of the poorest the southern half of Zambia has faced since 1981, negatively impacting crop production and consequently food availability and food access. Pest infestations and livestock diseases outbreaks, including foot-and-mouth disease (FMD), contagious bovine pleuropneumonia (CBPP) and fall army worm compounded the situation.

A total of 58 districts registered a huge decline in maize production, the main staple food. Three districts, including Luanga, Shang’ombo and Gwembe are projected to increase to IPC Phase 4 between October 2019 and March 2020. The situation is especially concerning in Gwembe district, in the Southern Province, which recorded a 98 per cent reduction in maize production, compared to last year and the five-year average. The district had the highest proportion of households that reported to have sold more than unusual amount of livestock. At national level, about 16 per cent decline in production has been registered (from 2,394,907 metric tons produced last season to 2,004,389 metric tons the current one).