Tens of thousands of civilians have fled Ar-Raqqa city in Ar-Raqqa governorate since the Syrian Defence Forces (SDF) began their offensive to retake control of the city from the Islamic State of Iraq and the Levant (ISIL). Around 190 000 people have been displaced; another 30 000 to 50 000 people are thought to remain inside Ar-Raqqa city. In July 2017, a WHO team comprising an external trauma care specialist and two WHO staff members visited the governorates of Ar-Raqqa and neighbouring Al-Hasakeh to assess the situation. 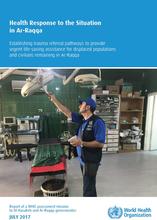 The purpose of their mission was two-fold:

The team visited eight hospitals and health care facilities in Ar-Raqqa and Al-Hasakeh governorates to assess their capacities and infrastructures. It also met with representatives of eight NGOs to discuss collaboration and coordination for potential evacuation pathways for severely injured patients. The team’s main findings and recommendations are summarized below: